When you think Lubbock, you think stand-up comedy. Well, maybe not yet, but there is a group of dedicated comics working on making that a reality. Bouncing from hotel bar, to dive bar, to a full-staged venue, Laugh Hub City is building a following and a solid group of regular acts.

I sat down with Caleb Davis, regular open-mic host and stand-up comic, to find out what about Lubbock inspires comedy and to get a feel for what the comedy scene is like. “Most Lubbockites are funny out of necessity – you’ve got to laugh to live here sometimes,” Caleb said. “Comedy is a way for you to create your own fun.” Which sounds reminiscent of the motivation that’s led many of Lubbock’s musicians to take the stage. Lubbock’s diversity plays a factor as well, bringing together comics from all different backgrounds and viewpoints so there’s variety of perspectives in their material. Laughter doesn’t discriminate; it’s a universal language that brings all sorts of people together. 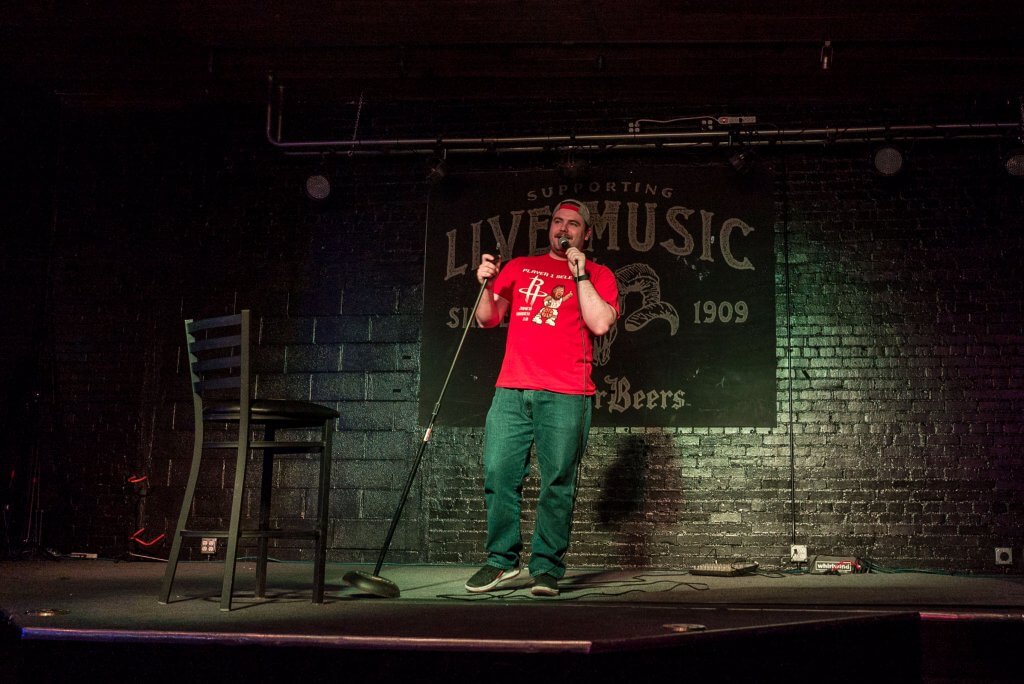 There is a bit of stand-up history in Lubbock. Until the mid-90s, Froggy Bottoms was THE comedy club in town. Comics came in from all over the area and cut their teeth in the small room before moving on to other cities. The owners closed their doors in 1998 leaving the Lubbock comedy scene high and dry. A decade later there was an attempt to bring comedy back to Lubbock with a series of open-mics, but nothing took hold until February 2014, when two Tech students who decided they wanted to try stand-up started searching for a stage.

Joe Gardner and Corey Wood just wanted to give it a shot, try out some jokes, see what happened. They found a willing venue in Jake’s Backroom who gave them one of their “off” nights during the week. A few years later you can find stand-up in the Hub City at a number of venues on any given night.

Tuesdays at the Recovery Room

Lubbock’s regular comics call this a “work night.” Every Tuesday at the Baymont Inn & Suites, a group of comics gathers to try out new material. The audience is almost exclusively other comics looking to do the same thing. Occasionally, they’ll have someone like me crash their party looking for a laugh, but this is ordinarily their night to perfect their craft. Comedy, much like any other art, is a process. There are elements to a joke that have to be tested and tried before they’re ready for an audience. Maybe you have a solid premise but can’t find the right punchline. Maybe it’s delivery or timing or a number of other things that need to be just right to get that all-important laugh. Whatever it is, it’s work and this is where it happens. 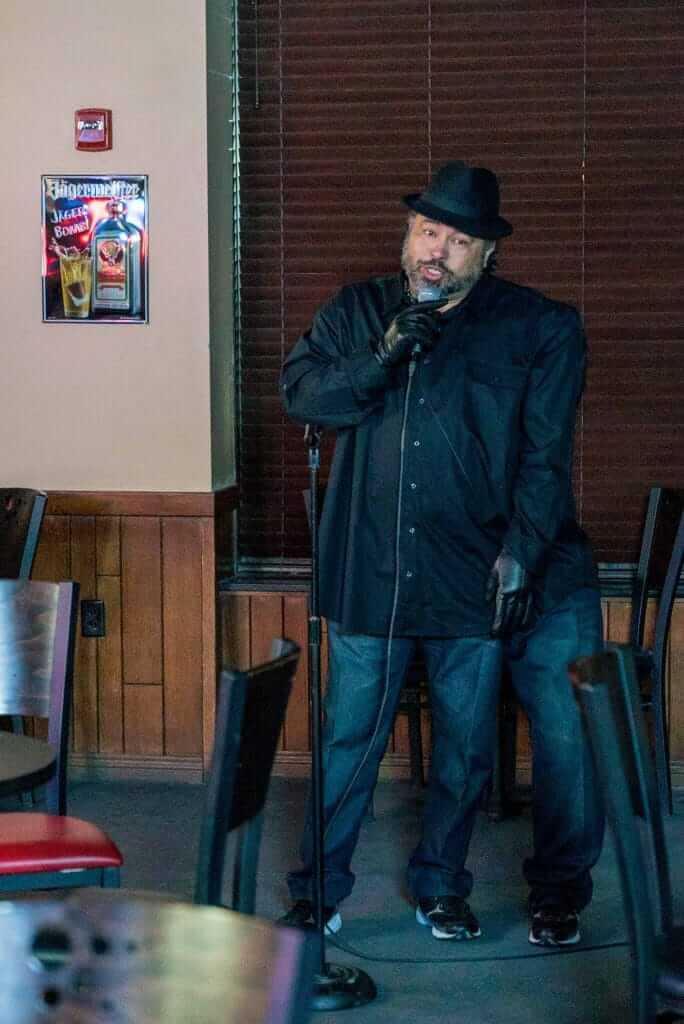 Wednesdays at The Lantern Tavern

The Lantern is the first open-mic of the week with a public audience. A joke that worked the night before may make it into a set here to see how it plays with a non-comedian crowd. Comedy is a direct feedback medium – you instantly know if a joke works or not. So if a joke picks up some laughs at The Lantern, it may have some legs and find its way into a routine.

Thursdays at Backstage in the Depot District

This is when comedians bring their A-game. This room has a full stage with lights and a line up of local comics ready to make you laugh. Comics don’t miss Thursday night at Backstage and neither does the crowd. Each comedian gets a three to five-minute set depending on the number of comedians signed up. Unique to this venue and this night, people are here for the jokes. After a week of working on new material and polishing their set, comics perform for a captive audience. With everyone engaged in the experience, this night is what a comedy club should feel like. 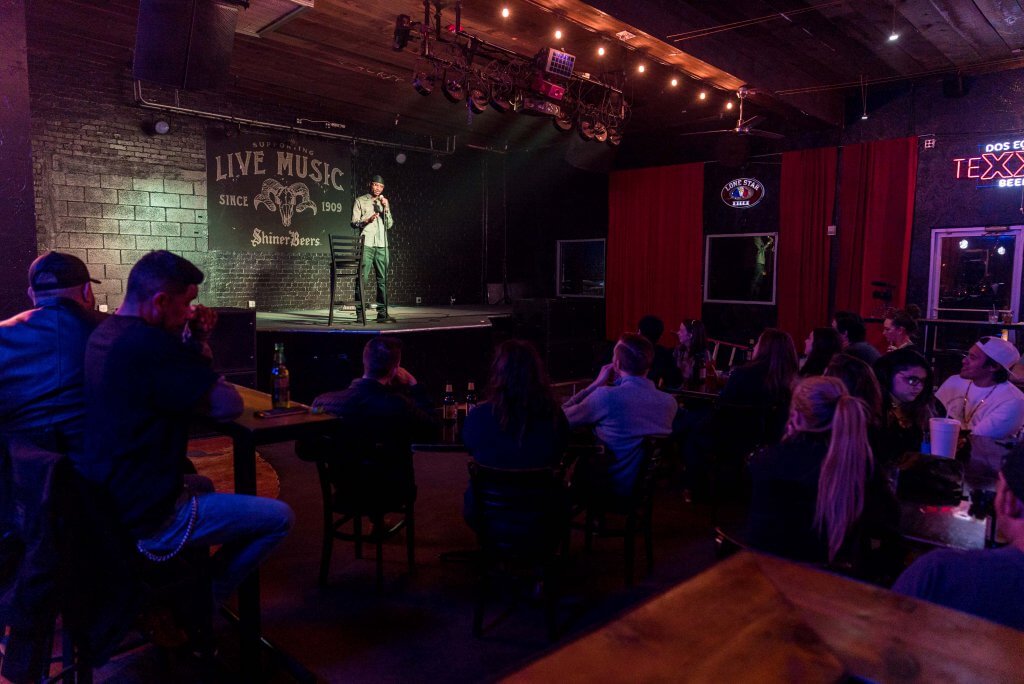 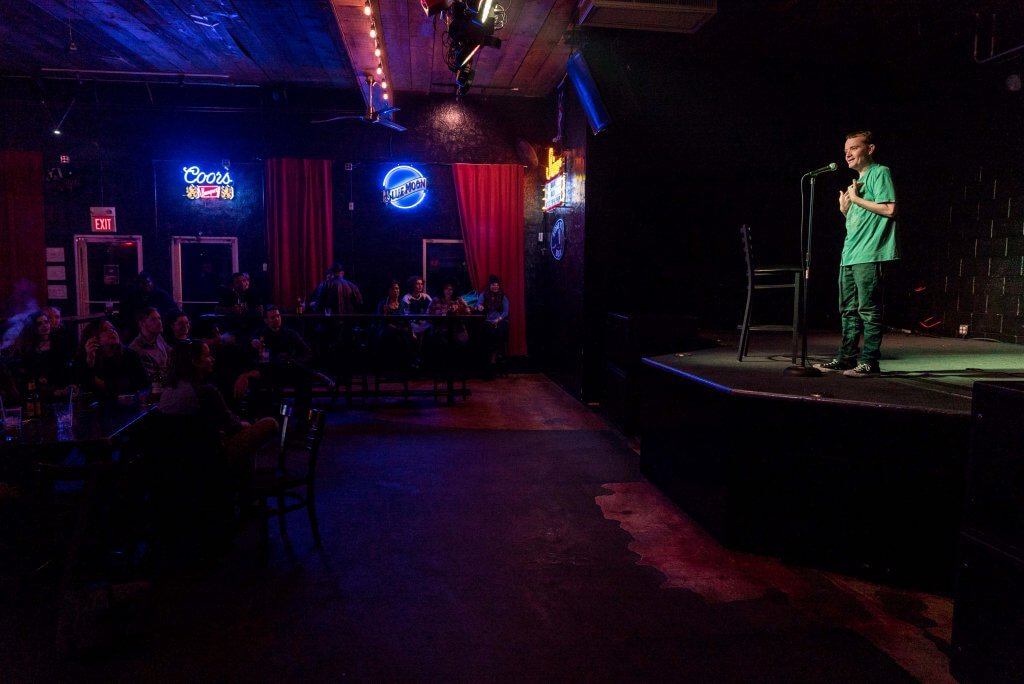 Every other Sunday, Laugh Hub City pulls together a selection of comics for a showcase at Lubbock’s self-proclaimed “5-star Dive Bar” BarPM. A college-heavy crowd sprinkled with some regulars make up the audience on a typical Sunday. The smaller, more intimate venue combined with the hand-selected stand-ups combine for a great night of entertainment. 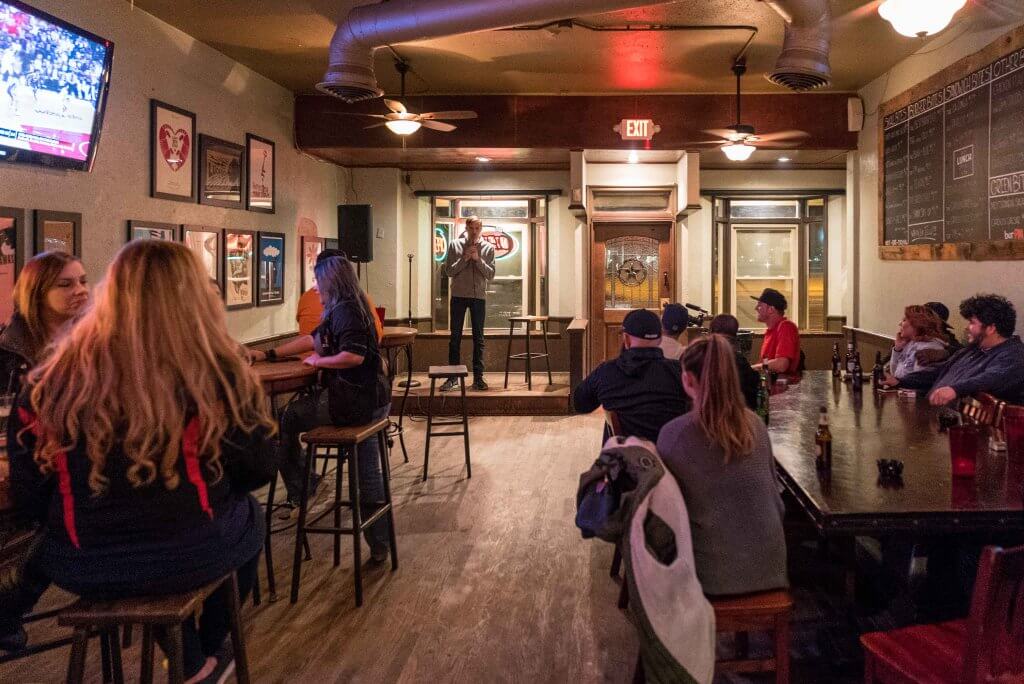 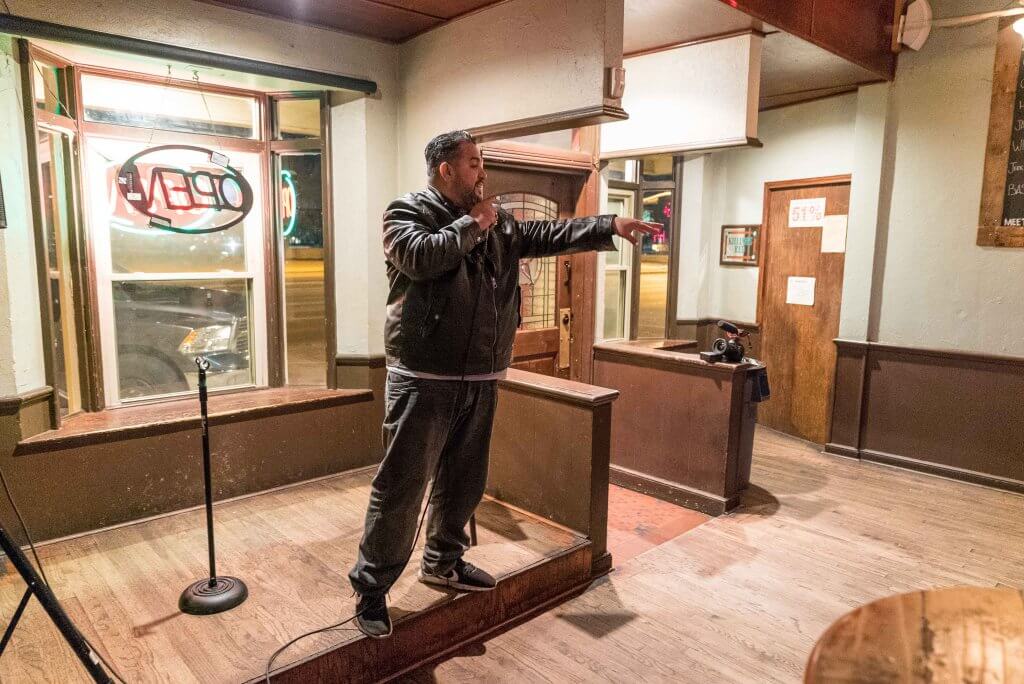 There are several local comics that you can’t miss if you have the chance to hear them. Kimothy Williams has made over 100 comedy shorts. Caleb Davis, Steven Feldman and Kendall Smith-Rodriguez always have solid sets. Kendall has one of our favorite Lubbock jokes.

“I’d like to give a shout out to Marsha Sharp, because if she didn’t do all that winning, it’d take me 10 minutes longer to get to school.”

In the past several years some well-known to semi-well-known comics have played Lubbock. Daniel Tosh performed at Texas Tech last year. Eric Friedman, a regular at the Laugh Factory and The Comedy Store, Olivia Grace, a contestant on Last Comic Standing, along with Ku Eugene from Houston and Eric Schwarz from L.A. have all come through Lubbock recently.

Laugh Hub City is a tight-knit group of creative funny people just looking to make people laugh. They’re very approachable and encouraging to anyone who wants to pick up a mic and test their comedic talent. While the group is mostly locals, there are often comics stopping through looking for an open-mic. Just last week, there was a comedian from Dallas in town that went on stage for a couple nights. There are up to five shows a week and unlike larger cities, you’ll get plenty of stage time. If you want to get involved, message their Facebook Page, or just show up to one of the open-mics and put your name on the list. They only have one rule, “Be original.”

*Note: Due to venue restrictions and the nature of some comedy, these events are suited for an adult audience. However, there’s plenty of fun for the whole family in Lubbock. Check out our favorite family adventures here.

5 Ways to Order a Chilton

The Power of Travel