The National Ranching Heritage Center has now been open to the public for 40 years. The historical landmark to this significant era of Texan and American ranching history has called Lubbock home since 1969, but held its grand opening on July 2, 1976 with a dedication by Mrs. Lyndon B. Johnson, coinciding with American bicentennial celebrations.

To celebrate 40 years, we’re showing off our four favorite structures. A testament to pioneers and the prevailing ranching spirit, these authentic structures help tell the story of the American West. 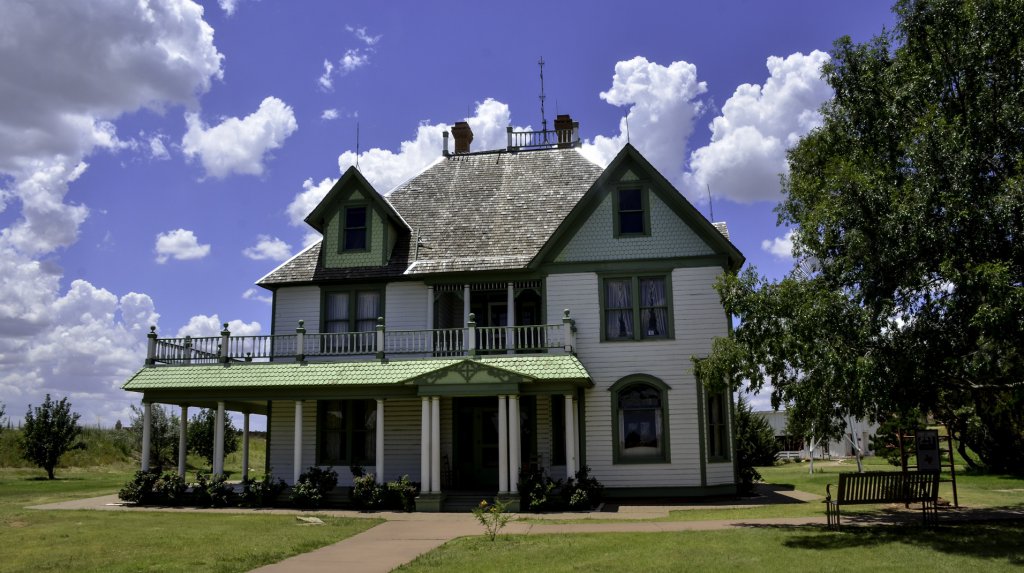 We start with the most elegant structure on the campus. This home stood on its own in what was to become the town of Bartonsite, but the unpredictability of the west, drought, blizzards and the Panic of 1893 led settlers away. When the Santa Fe Railroad completed its line from Amarillo to Lubbock in 1909, running through Abernathy, about eight miles east of Bartonsite, the home was moved intact on a flatbed truck sitting on 48-foot cross beams. In order to move the home 40 miles to Lubbock–a three-day journey–108 power and telephone lines were lowered or lifted.

The most recognizable structure also serves as home to a history of barbed wire and cattle brands. It was built in 1917 by one of the most influential and prosperous ranchers in Texas, Samuel Burk Burnett, to be “the finest ranch house in West Texas,” headquarters of his ranching empire. The barn housed expensive horses with fine bloodlines–animals admired by some of the wealthiest men and women in the West. A few years back “Live and Breathing” filmed live music sessions here, including Lubbock favorites, Thrift Store Cowboys, Brandon Adams, Daniel Markham and Charlie Shafter. Full playlist below. The railroad was essential to the growth of ranching, transporting cattle, settlers, manufactured goods, supplies and lumber to the plains. A popular stop for pictures, the Baldwin Locomotive represents those cattle cars used for shipping livestock in the 1920s and ’30s. These cars hauled sheep and small animals on the Santa Fe Rail Line. Ropes is the only depot in Texas that doesn’t bear its town name as the depot preceded the town. Humble in appearance, El Capote House has been linked with royalty, politicians, war heroes and Theodore Roosevelt. The cabin existed under the governance of three flags: the Republic of Texas, the United States of America and the Confederate States of America. El Capote’s owners engaged in dangerous lifestyles, including trail drives and wars with Indians and factions from Mexico, England and Cuba. The old cabin’s story contains more adventure and mystery than any other structure at the National Ranching Heritage Center.

With nearly 50 structures and a museum full of ranching exhibits, this list is just a taste of what you will find at The National Ranching Heritage Center. For a full list of Lubbock attractions, click here.